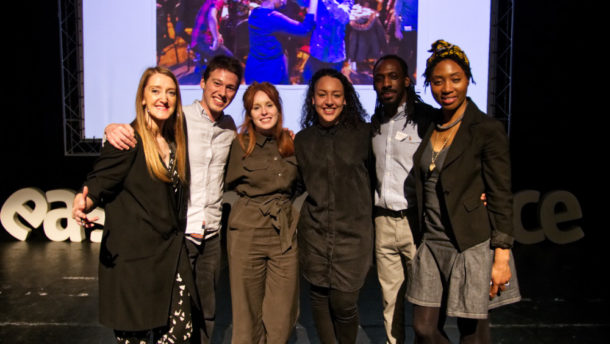 The Ideas Summit is the third biennial event offering artists, producers, venues and organisations from East London and beyond the opportunity to share and exchange enterprising ideas in dance.

Pitch Project: 10 Year Celebration – ICON & Round Table Discussion
Awarded Â£4,987.33 and event support by East London Dance to support Myself UK Danceâs 10th anniversary celebration. The project aims to launch an annual platform and discussion, paving the way for new and active female creatives in Hip Hop/Urban Dance to be seen, heard and celebrated equally alongside their male counterparts.

Pitch Project: Magical Minds
Awarded Â£4,980 and one week’s rehearsal space at Studio Wayne McGregor to develop Performance & Dancing Mindfulness workshops that focus on mental health and well-being. The workshops will be delivered to 10 primary schools across east London. Magical Minds provides children with a creative exploration into the human brain and tools to increase their ability to self-regulate their emotions.

Michael Simon
Creative artist and choreographer, Michael Simon, is also a contributor to The 8 Club, a new web series from the Young Vic exploring ideas around contemporary masculinity.
@msimonofficial | locslifeandlyrics

Pitch Project: Cain and Abel
Awarded Â£2,200 and introductions to Newham schools by Stratford Circus Arts Centre, to support the development of a first draft script and bespoke music, in preparation for a two-week R&D on a new dance theatre work that will use the biblical story of Cain and Abel to explore topics related to masculinity and knife crime.

Joel OâDonoghue (Joel O’Donoghue Company)
Joelâs work is a mash-up of athletic movement, subtle everyday gestures, and fantastically bizarre moments of nothingness. Each work he creates is a composition of memories.
joelodonoghue.co.uk

Pitch Project: The Museum of Memories
Awarded access to rehearsal, exhibition and event space and an introduction to Redbridge libraries by Redbridge Drama Centre, to support the rehearsal and production of a pilot event in east London, that focuses on bridging the gap between younger and older generations and making contemporary dance and culture more accessible to an older audience.

Each winner will also be given an annual One Dance UK membership.