The Talent House officially opened by the Mayor of London 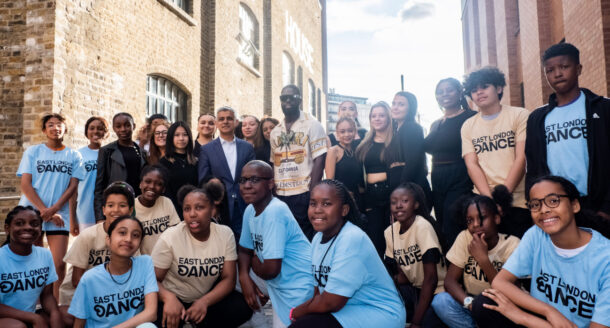 “Two organisations coming together, working together to be that springboard so these young people can aim for and reach the stars. This is the story of east London” The Mayor of London, Sadiq Khan

We are thrilled to announce that the Talent House, our new shared home with music organisation UD, was officially opened on Tuesday 5 July by The Mayor Of London, Sadiq Khan. What an incredible evening of celebration. In the atrium of the building guests were treated to performances from choreographer Kloe Dean and youth vocal collective Flames Collective, with DJ Pogo hitting the decks. The dance studios were taken over by Caravan Live Culture who presented an interactive and fully improvised live music and dance performance & jam. Across the other side of the building singer/song writer Nayana was in residency in the UD music studios, with special guest Ghetts popping in to take in the atmosphere and lend his support to the launch. It was fantastic to be able to celebrate and thank all the remarkable people who have made this space possible. We want to say an especially big thank you to former East London Dance CEO Polly Risbridger and the East London Dance staff team who have held onto the vision over the past 5 years, alongside our incredible board of trustees led by Moira Sinclair, who have so skilfully brought us to this pivotal new chapter in East London Dance’s long history. It was thrilling to see the whole building alive with dance and music activity – this got us incredibly excited about the future potential of the space and our partnership with UD, because the Talent House is designed to equip young diverse talent in east London to become the next generation of music and dance professionals by providing free and affordable access to world class facilities as a launchpad to reach new audiences, alongside facilitating collaboration between young people and early career creatives and producers. âFor more than three decades, East London Dance has played a central role in the development of dance in east London – nurturing, showcasing and championing young and emerging artists and creatives from black, Asian, ethnically diverse and working-class communities. With the Talent House, our first dedicated home, we are energised like never before to create a world where creative talent is always met with opportunity, no matter where you come from. Weâre committed to artist-led and co-designed programmes and to ensuring that the Talent House is a welcoming and open space for people to gather, connect, learn, collaborate and share their creativity with the world – so come and get involved.â Tia Hassan & Kate Scanlan, Joint Creative Director & Chief Executive, East London Dance

Whether you’re looking to learn some new moves, get support for your creative career, build your networks or for a space to realise your creativity, East London Dance and the Talent House are here for you, so get in touch!