Leaving Limbo Landing is an ambitious outdoor dance and aerial production, performed in air, in water and on land exploring journey, placement, displacement, settling, arrivals and departures. A visually arresting and poetic exploration about why we choose to leave or stay.

Inspired by choreographer Caroline Bowditchâs personal move from Australia to the UK, as well as stories from others from across the globe. These individualsâ stories of choosing (or not) where to settle are brought to life by a powerful all female cast of dancers and aerialists. Caroline Bowditch says:

âI have become increasingly interested in exploring why people choose to leave their birthplace, to move to another part of the world and I have gained a much greater awareness and appreciation of the fact that for many people it is not a choice at all â it is based on survival, fear or need, not desire, adventure or love.â

As part of the development of the project Caroline interviewed and photographed 12 east Londoners â some of which have always lived in east London, some that had chosen to move there, and some that were forced to move there.. They shared their stories and experiences which formed a photographic and sound exhibition that was shown in 2011 at the View Tube overlooking the Olympic Park and at Southbank Centre as part of Unlimited Festival.

Caroline received an Unlimited Commission to develop the production â a unique programme celebrating disability, arts, culture and sport as part of the London 2012 Festival that has challenged disabled artists across the country to make their most ambitious work to date.

Caroline is also a featured artist as part of the Push Me Please series on The Space where you can find a series of films charting her creative journey.
http://www.pushmeplease.co.uk/artists/caroline-bowditch-leaving-limbo-landing/ 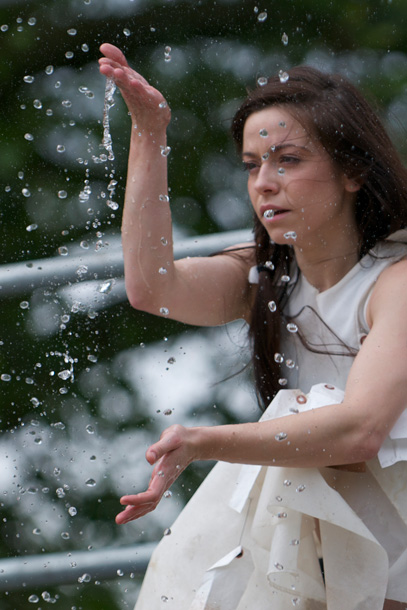 âThe use of water, air and earth as platforms for this story was engaging and effectively executed. â