Folk Dance Remixed is a performance and workshop concept for the great outdoors that is inclusive, accessible, funky and fabulously fun! Celebrating iconic English dance and fusing it with contemporary street styles, we remix the dance with the fresh flavour of todayâs hip-hop beats and traditional folk tunes. Led by folk dance artist, Kerry Fletcher, and street dance artist, Natasha Khamjani, the company rediscover old traditions through contemporary forms.

The highlight of Folk Dance Remixed is a high-energy 30-minute professional performance – Step Hop House – offering a unique remix of maypole, clogging and ceilidh with street styles including house, breakdance and international folk styles such as African and Bhangraâ¦. All set to a live soundtrack with fiddle, banjo, percussion and beatboxing. Performed by a cast of 9 diverse dancers with 4 musicians, this is folk dance like youâve never seen it before!

Also available are pop-up folk dances taking a traditional folk formation but replacing the traditional dance movement with a remixed version. These can pop up across a festival site to start building audiences for the performance and to provide âstreet entertainmentâ for passers by.

Once people have seen the performance and heard the music they wonât be able to keep their feet still so we are offering accompanying workshops for all ages to get the audience up and having a go: 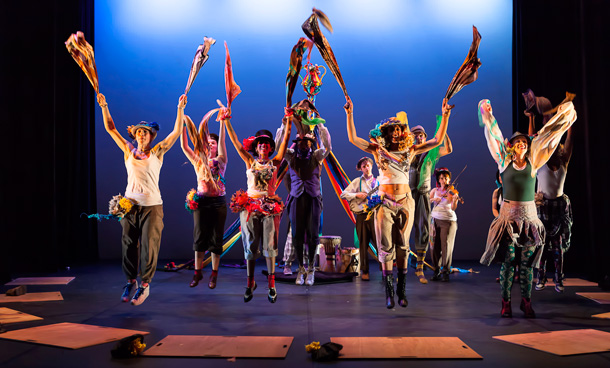 âFolk Dance Remixed is a company that truly fuses old with new, making obvious the links between different traditions of dance. Seeing their show at Cecil Sharp House the audience was a great mix of young funky urban Londoners with older,traditional folk dance fans. The ceilidh brought everyone together as if they always knew they been dancing to the same beat! A proper fusion!â

âCombining Folk dance and street dance is such a natural fusion, rhythmically and culturally. The roots of all these styles of dance come from a very grounded place and that is why they fit so well together.â

More details
If you are interested in booking this at one of your events or festivals please email office@eastlondondance.org