East Wall was a large-scale, spectacle of dance and live music, which took place at the Tower of London, one of the capitalâs most iconic buildings, from Wed 18 – Sun 22 July 2018. Directed by world-renowned choreographer, Hofesh Shechter, East Wall brought together a large cast of dancers, musicians and community participants to celebrate east Londonâs rich cultural heritage.

East Wall saw Hofesh Shechter working in collaboration with up-and-coming choreographers Becky Namgauds, Duwane Taylor, James Finnemore and Joseph Toonga alongside artists and young people. Shechter directed, and worked with the British musical director Nell Catchpole to create a score for the final production which sought to explore the modern realities of race, diversity and cultural identity alongside the rich history of the Tower of London and Tower Hamlets.

For videos, images and reviews of East Wall click here. 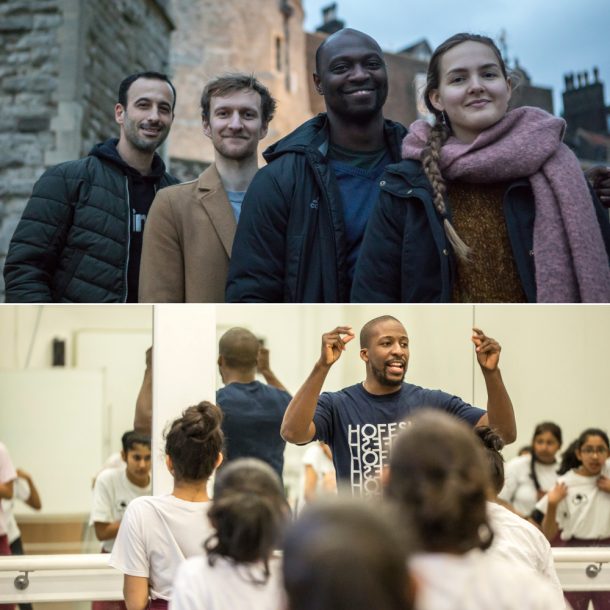 East Wallâs genesis came in 2014 as a long-term talent development project by East London Dance and Hofesh Shechter Company to nurture talented up-and-coming choreographers. By joining forces with Historic Royal Palaces and LIFT, the partners have committed to supporting selected choreographers and to working with local groups of dancers, musicians and young people from Tower Hamlets and East London boroughs through a wide-reaching youth engagement programme.

East Wall was performed in the Tower of London moat as part of LIFT 2018, offering diverse local, national and international audiences a chance to engage with the iconic Tower of London through the use of the moat as a space for public art and performance.

âFrom my first encounter with East London Danceâs group, The Fi.ELD, I was hooked. These young artists were not only impressive and determined in their drive to make work but they were incredibly inspiring to me as role models. Not just for other young people but for artists at all stages of their careers including myself. Iâm looking forward to seeing what we can make together.â

âThis ambitious new project grew out of demand from the young artists we work with at East London Dance who unanimously identified Hofesh Shechter as aÂ choreographer they wanted to learn from. We feel very proud to be enabling our east London community to engage with such an incredible company over such a sustained period of time, and to be working so closely withÂ Historic Royal Palaces and LIFT.â

âThrough creative partnerships like East Wall, Historic Royal Palaces is able to explore new and exciting ways to tell the stories of the Tower and reach a wider audience. Building on the success and impact of the poppies in 2014, we wanted to establish the moat at the Tower of London as a new outdoor performance site for London. East Wall will be a major part of establishing this reputation over the next few years and we look forward to collaborating with Hofesh Shechter Company, East London Dance and LIFT to produce a visually stunning and site-specific performance in 2018.â

âHofesh Shechter's East Wall provides a platform for extraordinarily talented choreographers from east London and promises to be a highlight of our 2018 LIFT festival. We are thrilled to be working with Hofesh again and forging new partnerships with Historic Royal Palaces and East London Dance.â

âHofesh Shechter Company and the partners' commitment to developing young and diverse talent is at the heart of this brilliant project, and it's also a great opportunity to make work in a new type of space, one that is in the heart of East London and open to all, and it's this type of inclusivity that excites me the most. We'll be blending high art and accessibility, music and dance performance, tradition and a very modern, diverse sensibility.â