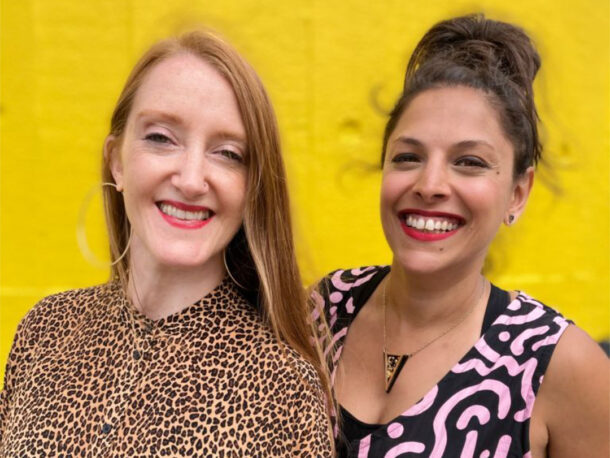 As East London Dance moves to a brand-new purpose built home this autumn, we’re thrilled to announce that Tia Hassan and Kate Scanlan have been jointly appointed to the position of Creative Director and Chief Executive on a job share basis to lead the organisation into its next exciting chapter.

Tia and Kate will take up the role from Monday 4 October as outgoing Chief Executive and Artistic Director Polly Risbridger prepares to depart at the end of October.

Tia and Kate have both previously worked with East London Dance and bring an impressive track-record and commitment to younger people and artists to this leadership role. They both have deep networks within the local east London artist communities, and a wealth of experience of large-scale community engagement and production.

Tia Hassan & Kate Scanlan said: âWe have both worked with East London Dance over the last 15 years and have a genuine love for the organisation and its work, participants, artists and audiences. We are excited to be a part of this next phase of the organisation. This is a critical time for the sector and now, more than ever, The Talent House will offer so much to artists, communities and individuals as we recover, rebuild and innovate again. Alongside the incredible team we are joining and our phenomenal building partner UD, we will make this superb space into a destination venue, an accessible and inspiring space that reflects Newham and Londonâs rich diversity. Inspired by the new building, we want to see artists taking the lead, developing ideas, making ground-breaking work and taking over the building, using it as a base to powerfully engage and grow their reach across east London and beyond.

Well-being and creativity will be at the heart of our vision, the building and our programmes. We will make space to support artists to realise their own vision, as well as leading on creative concepts at all scales in and outside the building. We believe in championing artists and individuals whose stories are rarely told alongside world-class artists and culture to inspire a wide range of people. From small scale to mass participation our work at East London Dance will bring together people of all ages and all walks of life, united through dance, culture, learning and having fun.â

Moira Sinclair, Chair of Trustees, East London Dance said: âAppointing a new company leader is perhaps the most important job a Board can do. I would like to thank all those who applied â we were grateful for their enthusiasm for East London Dance and our work and heartened by the depth of talent there is within the dance community. We hope Kate and Tiaâs appointment honours that process. They have an ambitious and inclusive vision for the artistic future of East London Dance, with community, well-being, and the centrality of artists at its heart and I am looking forward to working with them and the rest of the East London Dance team as we move creatively and physically into a new space.â

To find out more about Tia and Kate you can read the full press release here.